You are here:
AccessoriesOrdinance Modernization 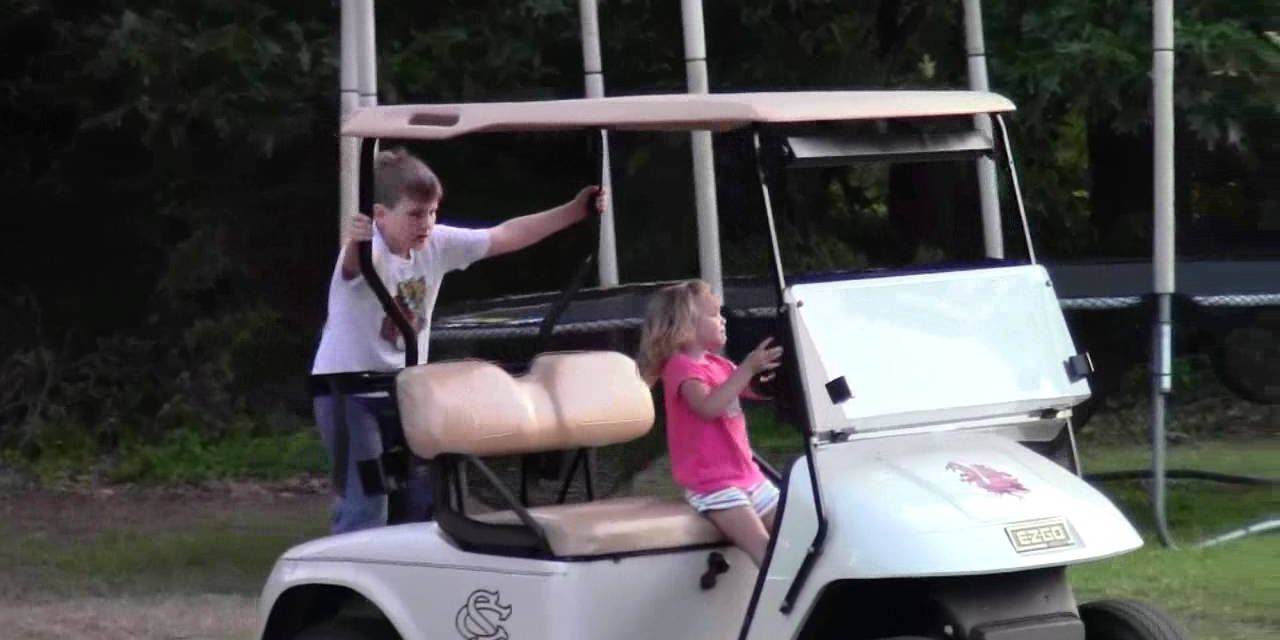 It was the second day after the latest, new ordinance went into effect stating “All children 16 years of age and under are required to wear lap seat belts, while riding in a golf cart,” that we put it to the test. Here’s the issue… our daughter is only sixteen months old and we’re not going to merely strap her into a lap belt on the golf cart. Not my kids in the picture, by the way.

Up until the new ordinance went into effect, we simply strapped her into her Ergo-Baby Carrier, which is essentially a kangaroo pouch on my wife. My wife then, of course, was buckled into her seat, with our daughter buckled in with her. Easy enough, right? Not so, said the Pinellas County Sheriff’s Office. Long story short, if your kids are under sixteen years old, they need to be wearing a seat belt as the law dictates (you should be too, for the record, even though it’s not a law). But if they’re of an age where they need to be in a car seat while traveling in your actual vehicle, they should also be in a car seat on your golf cart.

On Day Two of the new ordinance, we encountered a deputy while downtown on the cart, who informed us our way of doing it wouldn’t fly with the new ordinance. I asked what would, given that the rule just states kids under 16 need to be buckled in with a lap belt and I’m not willing to do that because she’s so tiny. He told us to use a car seat, which to be fair, should be obvious and make sense. But the problem is, car seats in 2019 aren’t exactly made to strap in to a simple lap belt setup and ours was of absolutely no use.

So, it was off to find a car seat that would work, and eventually we did. Turns out it’s America’s Number One Selling Car Seat. Who knew?

You’re looking for a car seat that can accommodate a belt strap (ideally through the frame in the back, in one side and out the other), AND a tether strap hooked to the back of the seat, which allows you to effectively strap the bottom of their seat to the bottom of your golf cart seat, then using the tether, strap the back of their seat to the back of your golf cart seat, or around its frame. This was the only way we found to truly secure her seat on our cart without it shuffling side to side or tipping back.

After a half dozen times of her riding around town in it, casually waving to passerby with the wind in her hair, I’m finally comfortable enough that she’s secure so I no longer hold onto her seat with one hand while driving with the other. Of course, my wife still pays the price when we’re out as a family… she’s the one who now has to ride on the back.

For fellow concerned parents wondering, we use the Graco Extend2Fit Convertible Car Seat (pictured here, on the right). It should also work on your cart like a charm.