You are here:
Vehicle Maintenance 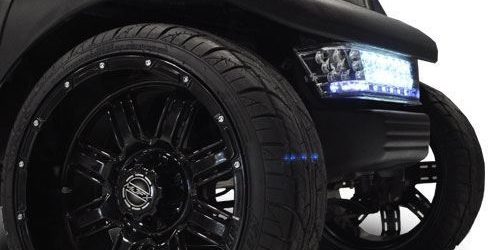 Golf carts are a particularly good application for LED Lighting conversions. LED Lighting offers a significantly lower power consumption combined with inherent ruggedness; both are a direct result of moving away from a filament technology to a chip technology.

LED, or “light emitting diode”, technology is by no means new. Developed at the dawn of the 1960’s, chip manufacturer Texas Instruments pioneered early designs for an electroluminescent (produces light when introduced to electricity) semiconductor. This design was later refined and made more manufacturable by Fairchild Semiconductors in 1970; a process that is still used today.

LEDs operate differently from typical incandescent filament-style light bulbs. Incandescent bulbs run electricity through a tungsten filament that becomes so hot that it glows and produces light energy. A combination of the tungsten filament and the vacuum inside the light bulb prevents the filament from literally burning up. By contrast, LEDs use silica chips that have been formulated, or “doped”, with intentional impurities such that they emit extra electrons, in the form of photons or particles of light, when electricity is passed through them.

LED chips have an advantage in that the visible color, often referred to as “color temperature”, can be tweaked during the manufacturing process. Filament bulbs rely on film, colored plastic filters, or phosphor coatings to change their color. This LED color range is measured in Kelvin or (K). Typical light bulbs produce a warm, yellowish light at around 2600K.  Colors resembling daylight fall around 4000K. Rather harsh white, with almost a blue hint, begin around 5100K.

Practically any light bulb on your cart can be replaced with an LED light.  LED headlights are fast becoming a must-have in golf cart applications. They appear brighter, are much more rugged, and use about 60% less electricity than standard bulb-style headlamps. Although you can purchase replacement LED bulbs that fit into existing light bulb sockets, they are not as well focused and produce mediocre results.

Many companies now sell direct-replacement headlight fixtures for most golf cart models. These purpose-built replacements are specifically designed and focused for the most effective lighting. The difference in effectiveness is staggering.  The replacement assemblies are a little costly, but the improvement is immediately rewarding. LEDs place a significantly lower power demand on your batteries (read that as: more range!), and they will almost certainly outlast the life of the cart.

When using LED replacements for your turn signals it can be a bit tricky. The typical flasher module used to blink the turn signals and hazard signal is an automotive flasher. These simple devices count on the fact that typical light bulb-style signals draw enough power to make the flasher do its job. LEDs only draw a small fraction of the power, which is typically not enough to make an automotive flasher module work properly.

When updating your turn signal and brake lights to LED you should also replace the flasher module with an electronic flasher. These are inexpensive and readily available; just replace your flasher with one of the same pin configuration but make sure the replacement clearly states that it is electronic. Your turn signals will work even better than they did before with a perfectly timed flash pattern.

A word of caution: When you start updating a used golf cart it is a bit like remodeling an older home. Poorly executed hacks from previous owners or sloppy cart dealers can often come back to bite you. Accessory power is one of those things.

For any of the instances mentioned above, this is definitely not how accessory power should be done in any golf cart. By drawing power unequally from the entire battery pack, you begin to unbalance the entire battery pack. This will cause premature wear on only the battery, or batteries, you’ve grabbed that power from – since they will not charge equally each time you recharge the entire cart. Where it will really get you is when you convert to LED lighting. These lights cannot tolerate 16-volts and will quickly fail. Sometimes, the damage can be instant. Once damaged, the LED lights cannot be repaired or salvaged.

Professionals use a small step-down power supply, or converter, that connects across the entire pack then steps the voltage down to the required accessory voltage of 12-volts. These converters cost anywhere from $20 – $30 and they are the best way to properly power accessories on a golf cart. Be sure to select the correct converter for the voltage of your cart’s battery pack. These converters are available in 36-to-12 volt, and 48-to-12 volt styles. Roughly the size of a pack of cigarettes, these converters can handle 10 Amps or more; which is plenty of current for a cart with LED lights and even a powerful automotive stereo on board. Be sure to wire the converter in the circuit after the key switch, that way the converter turns on an off with the key. You wouldn’t want the converter to run when you’re not using the cart.

Some folks choose to use a separate 12-volt battery for accessories, that’s ok too. That option has the minor advantage of being completely isolated from your main drive batteries; but it is a bit of a pain to separately charge, it takes up more space and adds more weight to the cart. LED lighting and even automotive sound systems draw so little power that converters are truly the best and most professional solution.