You are here:
Town Buzz 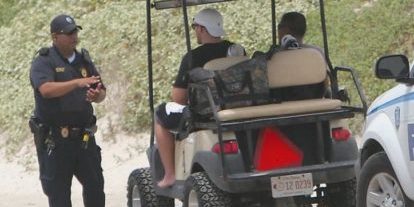 The period of warnings has ended, says the Pinellas County Sheriff’s office.

Yesterday, the city’s planning staff reached out to Dunedin Goes Carting asking if we would help publicize some information to our cart-driving community members.

On Thursday, January 24, 2019, Deputy Fallahee presented a traffic summary to the city’s traffic and planning division. I’m told this is an internal meeting where the city staff attempts to address a wide variety of citizen feedback that is either called in or emailed to the various staff members. This feedback covers everything from code infractions, wildlife complaints, infrastructure issues, etc.

The city staff indicated that deputy Fallahee reported a significant increase in complaints, from motorists, of golf carts darting across 580 / Skinner at Douglas and again at Highland. Deputy Fallahee also reported that he and his fellow community officers have personally observed a significant increase of golf carts crossing illegally at not only these locations, but also illegally crossing Alt. 19 between where Main Street ends at Stachnans Ice Cream, and where Marina Drive begins.

The deputy reported to staff that he and his team afforded golf cart drivers one full year of mostly warnings, however the number of transgressions has only increased. He announced that the warnings are ending beginning on January 24. He and his team will not only be writing moving violation tickets, but they will be actively monitoring these locations which will also include the intersection of Bass Blvd. and Skinner.

The ticket fines range from $60 up to $100 depending on the specific violation, and they are written against your driver’s license just like any other moving traffic violation.

The city staff continues to work on a legal crossing of SKinner / 580 with the traffic-controlled intersection of Bass Blvd. and Skinner as their current goal; however, they continue to struggle with the State (FDOT) providing approval. That said, they are now escalating to Tallahassee in an effort to help push advance this for us citizens.

Until then, the ONLY legal way to traverse to either side of Skinner / 580, is to cross Alt. 19 at Monroe St. (on the south) and Jackson St. (on the north), and travel down Victoria Dr. which connects them.

Every cart-driving person in our community, most city staff members, and ALL of the city Commissioners know this crossing arrangement is less than desirable, sometimes dangerously challenging, and that Victoria Dr. has poor surface conditions being a rural road.  They are doing everything they can to obtain a deviation authorization from FDOT to cross Skinner at Bass.

Please be careful, and please spread the word.